With mountains to the west and the sparkling Mediterranean Sea to the east, Barcelona possesses panoramic beauty. Among the most-visited sites in the Catalonia region’s capital are structures designed by Antoni Gaudi, including the colorful Casa Batllo, whimsical Park Guell and Barcelona’s most iconic building, the Expiatory Temple of the Holy Family, known locally as the Sagrada Familia. Walking tours are popular here, with plenty to admire in the Gothic Quarter and on La Rambla, a bustling pedestrian street lined with stalls and trees. Foodies find themselves on tours of tapas restaurants or exploring the sprawling Mercat de la Boqueria, a covered market with roots in the 13th century. For soccer fans, an excursion to Camp Nou, the home stadium for FC Barcelona, proves an exciting pilgrimage. 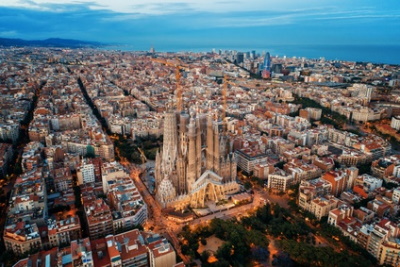 From El Prat International Airport (BCN): Exit the airport and take the road to Barcelona City. Once there, take the Ronda Litoral Highway and take the exit marked "Puerto." Turn right and then follow the signs indicating "Puerto." Ships are berthed at Adossat Terminal (Moll d'Adossat).

Call us at 800-338-4962 or inquire about a vacation here.
Open Mon-Fri 8am to 8pm, Sat 9am to 5pm, Sun 9am to 6pm, U.S. Central Time
Our office is open now.
Other Vacations
All Oceangoing Cruises
Escorted Tours
River Cruises
Hotels & Resorts
Africa Safaris
Site Info
About Us
Contact Us
Privacy Policy
Site Map
Terms & Conditions